The topic of ‘influence’ is as old a topic as art itself, but until recently, among historians of Western art, this was often discussed in a rather linear way: e.g., the Ancients influenced Raphael, who then influenced Ingres. This tendency coincided with the way art history as a discipline was taught, organized, and researched: scholars typically became specialists in French art, or Japanese art, or Aztec art. However, recent studies have begun to examine the way that influence was not simply linear: it was not just one European master influencing the next generation of European artists. Instead, art historians are beginning to understand how different countries and cultures influenced each other’s art. Scholars have begun to demonstrate that globalization is not, contrary to popular belief, a twenty-first-century phenomenon; this has resulted in exciting investigations into pre-modern and early modern global connections, and importantly, influence.

This article is specifically concerned with the rich history of artistic contact between Europe and East Asia, and how Asian aesthetics influenced Western art. This relationship began as an economic one: overland trade made it possible for ancient Romans to wear silk togas imported from China, and the Silk Road flourished for centuries until maritime trade eclipsed land routes in the sixteenth and seventeenth centuries. Merchants continued to import silk, while demand for porcelain, tea, spices, and lacquerware grew exponentially throughout Europe.[1] Initially, Europeans imported the aforementioned material goods from the East, but gradually, this increased contact introduced Asian ideas, from philosophy to politics, into European courts and noble social circles. Confucius became a lauded figure in the French salon, while the idea of the ‘benevolent despot’ became the political topic du jour. Concurrently, Jesuit priests became fixtures in imperial courts in China, while Spanish and Portuguese missionaries arrived in Japan.

Artistically, the European response to increasing contact with the East took numerous forms, and for as many purposes. Missionaries, and eventually artists accompanying diplomats and merchants, created anthropological drawings and engravings so that Europeans could see what Asia ‘looked’ like. This imagery found its way into European paintings of upper-middle-class domesticity. François Boucher’s Le Déjeuner (1739) is one such example. While on the surface this scene appears to be a typical contemporary French interior, a closer reading reveals symbols of worldliness. A family, reportedly the artist’s, enjoys the latest luxury trend: coffee. Their porcelain cups, likely imports, are adorned in the blue and white color scheme closely associated with China (and later adopted by Dutch manufacturers), and their ebony table is likely an Asian import. A blue Chinese vase is set upon a console table at the left, and the Chinese figure on the shelf next to the man is a Pu-tai, a symbol of domesticity and family life.

While European paintings depicted the ways that contact with Asia impacted material culture, other artwork engaged with an increasing awareness of Asian philosophies. Antoine Watteau’s Divinité Chinoise (c. 1730; fig. 2) engages with a doctrine becoming contemporaneously fashionable in French salons: Confucianism. Jesuit missionaries living in Beijing translated Confucian texts as early as the sixteenth century, and these texts circulated among scholars and aristocrats. Watteau creates a fantastical, hybrid European-Chinese atmosphere in which an enthroned Chinese pagoda is surrounded by topiaries; worshippers pay homage to him, and arabesques, C-swirls, and medallions bedeck the scene. While this scene is imagined, it was popular during King Louis XIV’s reign for salon-goers to conduct ‘mysterious’ Chinese rites as a serious spiritual exercise.

Although Watteau, a master of the Rococo style, did not paint many Asian subjects, those he did create contributed to the development of a new movement of European art: chinoiserie. As the name implies, chinoiserie is a European style of painting, interior design, and architecture that evokes Chinese aesthetics.[6] Well-known artists including Boucher, Thomas Chippendale, and Jean-Baptiste Pillement all worked in the style, while lesser-known and anonymous designers created innumerable wallpapers, pieces of lacquered furniture, and garden follies. Soft pastels, asymmetry, an emphasis on decoration for decoration’s sake, stylized nature and animal motifs, and aesthetically-pleasing subject matter characterized the style in every medium in which artists worked. In architecture, the pagoda at Kew Gardens (London) exemplified the fascination that Europeans had for exotic structures, and smaller versions decorated gardens throughout Britain, France, and Germany. Garden designs also borrowed from Chinese and Japanese landscaping theories, and the resulting anglo-chinois garden is still a popular remnant from this exchange.

The chinoiserie style began to decline in popularity by the end of the eighteenth century, as Neoclassicism came into vogue. However, at the outset of the nineteenth century, Romanticism arrived as a counterpoint to Neoclassical motifs. Contrary to chinoiserie or depictions of Asian wares and subject matter, the way that Asia influenced European Romanticism is more subtle and sparsely discussed in existing scholarship.

Romanticism places an emphasis on irregularity and nature-inspired compositions, and this aesthetic philosophy has its origins in Chinese garden theory.[7] The English statesman and essayist Sir William Temple wrote about the notion of sharawadgi, or “the Chinese idea of beauty without order,” in 1685.[8] This concept revolutionized garden design in Europe through the eighteenth century, and the architect William Chambers, having traveled to China, further transmitted these ideas in design theory. Chambers described the Chinese garden as creating scenes of horror, enchantment, and pleasure, which could be seamlessly compared to the sublime, beautiful, and picturesque—a triad that would become significant aesthetic categorizations of the Romantic movement. Significantly, these categories brought a new emphasis on emotional and psychological responses to artwork.

In European Romantic painting, John Constable’s landscapes embody this irregularity and appeal to emotion. An example can be seen when comparing Constable’s Hampstead Heath, Branch Hill Pond (1828) to a Chinese painting from the Qing dynasty: Wu Li’s Spring Comes to the Lake (1676). To be clear, my claim is not that Constable copied traditional Chinese landscape paintings; rather, his landscape paintings were informed by the same aesthetic philosophies as this Chinese example. The paintings share a varied but subtle topography, an off-center composition, and well-balanced fore-, middle-, and backgrounds. The perspective has also been slightly flattened. In Constable’s example, human figures are present but not predominant. Constable, like Wu Li, depicts a humble, natural scene rather than a grand historical or mythological narrative. These paintings epitomize controlled irregularity—a version of nature that is most perfect. This interpretation of Romanticism spread beyond Britain: the Barbizon school in France and, later, the Hudson River school in the United States were influenced by Constable’s approach.

While contact with China resulted in flourishing new styles in painting, interior design, ceramics, and gardens, Europe’s relationship with Japan in the second half of the nineteenth century similarly saw new styles and trends emerge within European artistic circles. Upon the forced reopening of Japan in 1858, European merchants began importing various Japanese objects and artwork into Europe; ukiyo-e, or color woodblock prints, were especially prized. Fascinated by these prints, Vincent van Gogh created copies of two of Hiroshige’s compositions: Flowering Plum Tree (figs. 5-6) and The Bridge in the Rain (both 1887). However, van Gogh and other artists were captivated by new design techniques that they admired in ukiyo-e prints, including flattening planes and an absence of one- or two-point perspective, bold palettes and outlines, and a distinctive lack of chiaroscuro.[9] Beyond literal copies, many of van Gogh’s most famous works are characterized by these aforementioned traits, including the warped perspective in Bedroom in Arles (1888), the flattened color fields and uniform lighting in The Night Cafe (1888), and the thick outlines of Almond Blossom (1890).

Like van Gogh, several Impressionists and post-Impressionists throughout Europe found inspiration in Japanese art. Many of the design principles mentioned above, including novel approaches to perspective and color, became distinctive features of Impressionism and post-Impressionism. However, just as in preceding centuries, Asian imports and their diffusion into European material culture continued to serve as subject matter in painting. Claude Monet’s La Japonaise (fig. 7) depicts a European woman (the artist’s wife) wearing a kimono and standing in front of a wall that has been covered with Japanese fans. The kimono itself features a stylized Buddhist figure, and the sheen of the kimono’s fabric implies it may be silk with gold embroidery. The fans feature peeks of Asian-inspired imagery, including a portrait of an Asian woman, a crane (a bird associated with China), and a harbor (reminding the viewer of Europe’s maritime trade with Japan).

Whether examining paintings and interior design or considering the popularization of tea and porcelain, the influence of Asian aesthetics, material culture, and artwork on European visual culture cannot be underestimated. While the relationship between individual countries was often complex and at times mired in conflict, European artists were, and continue to be, perennially inspired by the motifs, materials, and techniques that were imported from Asia. 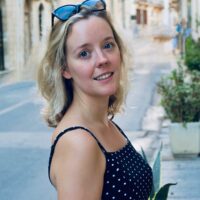 Dr. Kara Blakley is an independent art historian. She received her Ph.D. in Art History and Theory from the University of Melbourne (Australia) and previously studied and taught in China and Germany.