Joshua began the new weekly live stream event called “Master Monday” by analyzing Michelangelo’s iconic drawing, a seated male nude twisting around. The event had three parts. In the first, Joshua lectured on the selected master drawing. The second part was a recorded time-lapse of Joshua’s master copy in which he clarified his analysis approach. The third part was a critique session of master copies by twenty-four NMA students. The assignment was to do a two-hour copy of the seated nude by studying the logic and the process behind the original. Joshua stressed the importance of avoiding the mindless transcription of lines.

“There is an inheritance of craftsmanship and knowledge in many of the traditions on which we can build. Michelangelo was doing that. He started by learning the anatomy and design of the figure from classical antiquity—the Greeks and Romans. Later in his life, he made his own anatomical studies of dissections of cadavers,” explained Joshua in his lecture.

Joshua’s desire to unlock the craft and technique of the masters by analyzing their drawings was the beginning of his journey as an artist. This was, in essence, the driving force behind his creation of New Masters Academy.

Although Joshua’s admiration for Renaissance work started as a child during his first travels to the museums of Paris, Rome, and Florence, it wasn’t until he decided to follow his calling as a full-time artist as a young adult that he took on his path to mastery.

Over a decade ago, Joshua pursued self-instruction rather than going to art school. He laid out a training regimen of master copies, anatomical study, and drawing from imagination, a practice he still does daily, and one which he believes is vital.

A milestone in his quest of finding mastery was during a trip in Florence, Italy, in his early twenties, where he visited the Casa Buonarroti (the museum build out of Michelangelo’s home), and purchased a four-volume set of rare reproductions of the corpus of Michelangelo’s drawings. In awe of the sophistication of line-work, gestures, and designs, he began the exercise given to apprentices for hundreds of years, spending 3 years painstakingly copying hundreds of Michelangelo’s drawings as well as other artists like the Baroque painter Peter Paul Rubens, and Jacopo Tintoretto.

In working out a method for analyzing these masterworks mindfully, he felt he was improving very quickly.

Joshua explained to his students on the question on how to retrace the thought process of the masters drawing, “I am trying to draw and think like Michelangelo for the purpose of the study. We don’t have to copy every single line. It is more of a concentration on the thinking and the mentality that goes behind it.

“If you are going to do this study repeatedly, there will be more information to learn. Like a crime scene, we have evidence of what the intention of the artist was, what is going on in terms of drawing fundamentals, construction, and gesture of the figure.”

In the lecture part of Master Monday, Joshua started with information on the selected drawing:

“The seated man twisting around was a working drawing, not a presentation drawing. In this case, it was a study for a commission called the Battle of Cascina. It’s now lost; it is supposed to be designs for two frescos by Leonardo da Vinci and Michelangelo that represented these complex multi figural scenes known in Italian as Historias, and those were seen as the pinnacle of artistic achievement. So this is one of many figures. In this scenario, the soldiers were bathing. It is a bather that was interrupted or surprised by Pisa’s army, so he is twisting around sort of in this vulnerable nude position, realizing it is time for battle.

“From a technical perspective, the drawing is done in ink, a technique he learned from the master he was apprenticed under named Ghirlandaio. This pen technique is very typical of Michelangelo. In the working process, The first drawings were imagination sketches, in the case of Michelangelo, these were little thumbnail sketches, or boxy figures where straights were being used. And then he would often make what were called Bozzetti or a Bozetto, which are little wax models. In this particular drawing, I am assuming Michelangelo was working from life.

“We do master copies because it is the best way to learn information that has already been figured out before us. There is the famous Einstein quote about standing on the shoulder of giants. That is what we are doing when we study the masters of the past. There may not be artists alive today that draw as well as Michelangelo, Raphael, or Dürer, but that doesn’t stop us from choosing these artists as our teachers. As we are going through this series, I am going to be not so much your instructor as your guide. Michelangelo is our instructor today.”

Joshua then demonstrates the concepts of gesture and construction by drawing over the master study in diagrams. He started by pointing out the proportional relationships of the leg’s foreshortening, which can be miscalculated easily. He went on to emphasize the importance of paying attention to the thrust of the torso. Students were advised to not lean the ribcage forward too much or stand it up too tall and rigid. Another challenge he pointed out is not to make the round lines too curvaceous.

One of the questions a student asked during the live stream was considering the strong foreshortening of the leg why the knee joint facing the viewer on Michelangelo’s drawing seems rather small.

Joshua answered, “In photography, if you had a wide-angled lens, [the knee] would be larger. We are not imitating cameras; what we are doing is making a visual scene. Michelangelo is downplaying the convergence because this is for a fresco. If he was to use proper linear perspective some of the figures in the large scene would be highly distorted and the fresco would appear warped from certain angles.”

After a 7 minute sped-up time-lapse from an 8-hour master study Joshua did of Michelangelo’s drawing, he critiqued students’ work by pointing out room for improvement and demonstrating concepts by drawing over the drawings digitally.

As the stream progressed for over three hours, Joshua concluded with an introduction to the next (this week’s) master study. An even more ambitious drawing by the great master, The Christ on the Cross, for the next live stream on Monday January 24th at 9:30 a.m. Pacific Standard Time.

While only New Masters Academy subscribers get access to the archived streams, the live event is available free to all. The stream is held weekly at 9:30 am Pacific Standard Time. You can learn more about Master Mondays at the NMA Discord server here. 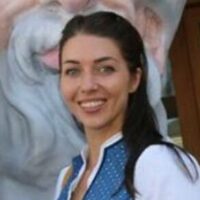 The Philosophy behind Raphael’s “School of Athens”
December 9, 2020