The Miraculous Beauty of the Book of Kells

Perhaps it’s no surprise that the hospitable Irish took in a ‘foreigner,’ a Welshman named Patrick, and made him their own Patron Saint. And Saint Patrick’s Day, that boisterous day of merriment, comes around again this month on the 17th of March.

The Irish also gave the world Halloween, another day of revelry, but in their defense, they’ve also made quite a considerable contribution in most areas of the arts, too; from George Bernard Shaw, to Yates and James Joyce, to Sinead O’Connor and of course U2.

There are also dozens of Irish painters of note dating back across the centuries, from Norah McGuiness to James Barry, but few can still draw a crowd like those anonymous artisans, devotees of the Christian faith and St. Patrick himself, who illustrated the Book of Kells.

At its core, the Book of Kells is simply a Christian bible containing the four Gospels of the New Testament. At just ten inches by thirteen, it dates from around 800 AD, and along with delicate hand-painted Latin calligraphy, it is filled with work that became the standard in religious iconography; from hosts of angels to various saints and Stations of the Cross to depictions of Christ.

The Book of Kells, also known as the Book of Columba, after the Columban Monks who created the work, is now housed at the Trinity College library in Dublin. It takes its name from the Abbey of Kells, in County Meath, where it was kept for centuries. Kells Abbey was plundered by Vikings repeatedly during the 9th Century, and how the book survived is one of its mysteries. Indeed the earliest mention of the book was a report of its theft in the Annals of Ulster; the entry notes “the great Gospel of Columba, the chief relic of the Western World, was wickedly stolen during the night from the western sacristy of the great stone church at Cenannas.” The chief relic of the Western world!

The book was kept in the Abbey in Kells until Oliver Cromwell’s army arrived in 1654. His forces were quartered at the Abbey, so the governor of the town sent the book to Dublin for safekeeping. One can’t help but note; Oliver Cromwell, an infamous man of legendary historical stature came into this world and then left it, while the book, a thing of great beauty, remains to this day. Isn’t that the great spell of all things from antiquity, that the beauty and dedication of those artisans remains, while the whole of history passes into the mist of time.

Historians believe the work may well have been commissioned to mark the two hundred year anniversary of the death of Saint Columba and, viewed as one of Ireland’s chief national treasures, it draws lines of visitors to this day, fascinated by both its antiquity and beauty.

The work’s standing as a piece of pure religious history is equal to that of Michelangelo’s work in the Sistine Chapel. But, one does not need a religious or spiritual leaning to have one’s breath taken away by the obvious devotion these unknown monks gave to their work.

Whatever inspired this incredible artistry, the book certainly stands out among traditional Christian texts in terms of its design. The complexity and detail is rare for works of this early period.  Drawn from both the geography and the pagan landscape of its time, the designs swirl in a myriad of sophisticated Celtic motifs and symbols, entwined with mythical creatures, depicted in saturated colors. The pigments, yellow and red ochre, lapis, indigo and copper verdigris, were sourced from as far as the Mediterranean and Afghanistan. The lettering was accomplished with iron gall ink, and is thought to be the work of at least three different scribes.

Each of the six hundred and eighty calfskin vellum pages is a masterpiece unto itself and the Latin script, a festival of the ornate, sheds any sense of the arcane, to become a poetic coda replete with portent and mystery.

One might wonder at the dedication and time it must have taken to complete, and wonder too, whether those artisans had any idea people would still be marveling at their work these many centuries later. There is certainly a sense of enigma when staring at its pages, trying to peer back down through time to catch a glimpse of our world and the expressions of our culture in such a far off epoch. Perhaps that is part of the fascination; we are not just seeing ‘the work,’ we are hoping to catch sight of the actual people who made it. It is easy to imagine those artists might be staring right back at us, wondering how things have turned out all of these years later.

Of course, there was no printing press, no means of cheap mass production to propagate the words of the Gospel in 800 AD, but it seems obvious, whoever dedicated the excruciatingly painstaking time to create this masterpiece would have produced it in the exact same manner today. They were devoted both to their god and to their craft, and perhaps those were one and the same. But isn’t that steadfast fidelity a line, a constant that, to this day, connects artisans across the ages, a conversation, an exploration that is still very much in progress, and timeless.

Technology may very well have marched onwards, but when it comes to the human condition, it is clear we know no more and no less today than those who were able to create such miraculous and sophisticated works of art as long ago as the iron age.

Through the beauty of their work we are able to find a sense of real and tangible connection to a deep and shared heritage, in what might otherwise have seemed a miscellaneous and disconnected history, lost to the darkness of time.

To witness such work first hand is to incur a debt we can only pay through our most humble appreciation and deepest gratitude, with reverence and wide-eyed wonder. For today’s artisans, they must surely stand as lights from the past that still guide the way forward, inspiring us all to our highest calling, be that to God or art, or both. 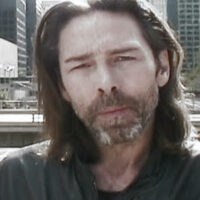 Pete McGrain is a professional composer, writer and filmmaker. Currently living in Los Angeles, Pete hails from Dublin where he attended Trinity College.

The Miraculous Beauty of the Book of Kells